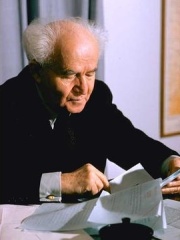 David Ben-Gurion ( ben GOOR-ee-ən; Hebrew: דָּוִד בֶּן-גּוּרִיּוֹן‎ [daˈvid ben ɡuʁˈjon] (listen); born David Grün; 16 October 1886 – 1 December 1973) was the primary national founder of the State of Israel and the first Prime Minister of Israel. Adopting the name of Ben-Gurion in 1909, he rose to become the preeminent leader of the Jewish community in British-ruled Mandatory Palestine from 1935 until the establishment of the State of Israel in 1948, which he led until 1963 with a short break in 1954–55. Ben-Gurion's passion for Zionism, which began early in life, led him to become a major Zionist leader and executive head of the World Zionist Organization in 1946. Read more on Wikipedia

David Ben-Gurion was the first Prime Minister of Israel and is most famous for his role in the creation of the state of Israel.

Among politicians, David Ben-Gurion ranks 182 out of 15,710. Before him are Björn Ironside, Gamal Abdel Nasser, Alexander I of Russia, Dwight D. Eisenhower, Rodrigo Duterte, and Mars. After him are Ibrahim of the Ottoman Empire, Al Gore, Charles VI, Holy Roman Emperor, Puyi, Frederick II, Holy Roman Emperor, and Louis Philippe I.