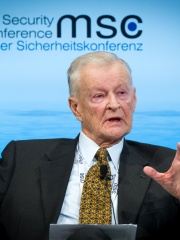 Zbigniew Kazimierz Brzeziński ( ZBIG-nyef brə-ZIN-skee, Polish: [ˈzbiɡɲɛf kaˈʑimjɛʐ bʐɛˈʑij̃skʲi] (listen); March 28, 1928 – May 26, 2017), or Zbig, was a Polish-American diplomat and political scientist. He served as a counselor to President Lyndon B. Johnson from 1966 to 1968 and was President Jimmy Carter's National Security Advisor from 1977 to 1981. As a scholar, Brzezinski belonged to the realist school of international relations, standing in the geopolitical tradition of Halford Mackinder and Nicholas J. Spykman, while elements of liberal idealism have also been identified in his outlook. Brzezinski was the primary organizer of The Trilateral Commission.Major foreign policy events during his time in office included the normalization of relations with the People's Republic of China (and the severing of ties with the Republic of China on Taiwan); the signing of the second Strategic Arms Limitation Treaty (SALT II) with the Soviet Union; the brokering of the Camp David Accords between Egypt and Israel; the overthrow of the US-friendly Mohammad Reza Pahlavi and the start of the Iranian Revolution; the United States' encouragement of dissidents in Eastern Europe and championing of human rights in order to undermine the influence of the Soviet Union; supporting the Afghan mujahideen against the Soviet-backed Democratic Republic of Afghanistan and, ultimately, Soviet occupation troops during the Soviet–Afghan War; and the signing of the Torrijos–Carter Treaties relinquishing U.S. Read more on Wikipedia

Zbigniew Brzezinski is most famous for being the National Security Advisor to President Jimmy Carter. He is also known for his role in the 1979 Iranian Revolution and the Soviet invasion of Afghanistan.

Among politicians, Zbigniew Brzezinski ranks 801 out of 15,577. Before him are Louis, Duke of Burgundy, Hassan II of Morocco, Isabella II of Spain, İsmet İnönü, Walter Ulbricht, and Arthur Wellesley, 1st Duke of Wellington. After him are Charles II of England, Stanisław August Poniatowski, Paul of Greece, Valentinian I, Christian X of Denmark, and Ecgberht, King of Wessex.