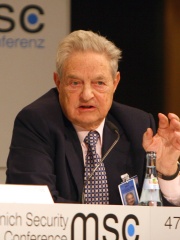 George Soros, Hon (born Schwartz György, August 12, 1930) is a Hungarian-born American billionaire investor and philanthropist. As of May 2020, he had a net worth of $8.3 billion, having donated more than $32 billion to the Open Society Foundations.Born in Budapest, Soros survived the German occupation of Hungary and moved to the United Kingdom in 1947. He studied at the London School of Economics and was awarded a bachelor's, then obtaining a master's, and eventually a Doctor of Philosophy (Ph.D.) from University of London. Read more on Wikipedia

Since 2007, the English Wikipedia page of George Soros has received more than 19,436,290 page views. His biography is available in 73 different languages on Wikipedia making him the 3rd most popular businessperson.

Among BUSINESSPEOPLE In Hungary

Among businesspeople born in Hungary, George Soros ranks 1. After him are Charles Simonyi (1948) and Andrew Grove (1936).