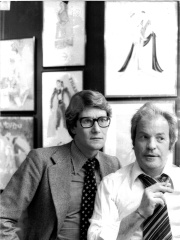 Yves Henri Donat Mathieu-Saint-Laurent (, also UK: , US: , French: [iv sɛ̃ lɔʁɑ̃]; 1 August 1936 – 1 June 2008), professionally known as Yves Saint-Laurent, was a French fashion designer who, in 1961, founded his eponymous fashion label. He is regarded as being among the foremost fashion designers in the twentieth century. In 1985, Caroline Rennolds Milbank wrote, "The most consistently celebrated and influential designer of the past twenty-five years, Yves Saint Laurent can be credited with both spurring the couture's rise from its 1960s ashes and with finally rendering ready-to-wear reputable." He was able to adapt his style to accommodate the changes in fashion during that period. Read more on Wikipedia

Since 2007, the English Wikipedia page of Yves Saint Laurent has received more than 187,206 page views. His biography is available in 57 different languages on Wikipedia making him the 3rd most popular fashion designer.