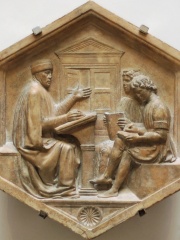 Priscianus Caesariensis (fl. AD 500), commonly known as Priscian ( or ), was a Latin grammarian and the author of the Institutes of Grammar, which was the standard textbook for the study of Latin during the Middle Ages. Read more on Wikipedia

Priscian was an early medieval scholar who is most famous for his work on Latin grammar, the "Institutiones grammaticae".

Page views of Priscians by language

Among philosophers, Priscian ranks 461 out of 1,089. Before him are James Ussher, Phaedo of Elis, Linji Yixuan, Roger Scruton, Jean-Luc Nancy, and Dong Zhongshu. After him are Antiochus of Ascalon, Berengar of Tours, Ari Thorgilsson, Plutarch of Athens, Stein Rokkan, and Arne Næss.

Among people born in 500, Priscian ranks 16. Before him are Yazdegerd II, Antipope Laurentius, Antipope Dioscorus, Balash, Ambrosius Aurelianus, and Gundobad. After him are Ernak, Hormizd III, Hesychius of Alexandria, Rhadamistus, Theudigisel, and Rechiar. Among people deceased in 600, Priscian ranks 4. Before him are Jordanes, Abraha, and Abd Manaf ibn Qusai. After him are Qasim ibn Muhammad, Sophia, Leander of Seville, Stephanus of Byzantium, Hrólfr Kraki, Eutocius of Ascalon, Agathangelos, and David the Invincible.

Among PHILOSOPHERS In Algeria