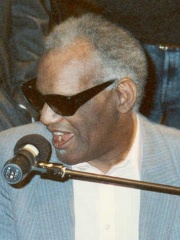 Ray Charles Robinson (September 23, 1930 – June 10, 2004) was an American singer, songwriter, pianist, and composer. Among friends and fellow musicians he preferred being called "Brother Ray." He was often referred to as "The Genius." Charles was blinded during childhood due to glaucoma.Charles pioneered the soul music genre during the 1950s by combining blues, jazz, rhythm and blues, and gospel styles into the music he recorded for Atlantic. He contributed to the integration of country music, rhythm and blues, and pop music during the 1960s with his crossover success on ABC Records, notably with his two Modern Sounds albums. Read more on Wikipedia

Ray Charles was most famous for being a singer and pianist. He was also a singer of rhythm and blues, jazz, gospel, and country music. He was born in 1930 and died in 2004.

Among musicians, Ray Charles ranks 19 out of 2,675. Before him are Leopold Mozart, Clara Schumann, George Harrison, Elton John, Arcangelo Corelli, and Madonna. After him are Brian May, Cat Stevens, Chuck Berry, Eric Clapton, Mark Knopfler, and Jeff Beck.