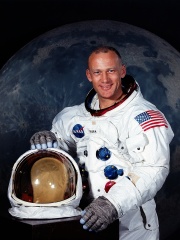 Buzz Aldrin (; born Edwin Eugene Aldrin Jr., January 20, 1930) is an American former astronaut, engineer and fighter pilot. Aldrin made three spacewalks as pilot of the 1966 Gemini 12 mission, and as the lunar module pilot on the 1969 Apollo 11 mission, he and mission commander Neil Armstrong were the first two humans to land on the Moon. Born in Glen Ridge, New Jersey, Aldrin graduated third in the class of 1951 from the United States Military Academy at West Point, with a degree in mechanical engineering. Read more on Wikipedia

Since 2007, the English Wikipedia page of Buzz Aldrin has received more than 9,085,307 page views. His biography is available in 90 different languages on Wikipedia making him the 5th most popular astronaut.