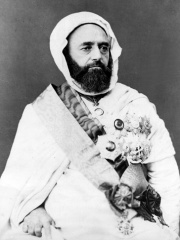 Abdelkader ibn Muhieddine (6 September 1808 – 26 May 1883; Arabic: عبد القادر ابن محيي الدين ʿAbd al-Qādir ibn Muḥy al-dīn), known as the Emir Abdelkader or Abdelkader El Hassani El Djazairi, was an Algerian religious and military leader who led a struggle against the French colonial invasion of Algiers in the early 19th century. As an Islamic scholar and Sufi who unexpectedly found himself leading a military campaign, he built up a collection of Algerian tribesmen that for many years successfully held out against one of the most advanced armies in Europe. His consistent regard for what would now be called human rights, especially as regards his Christian opponents, drew widespread admiration, and a crucial intervention to save the Christian community of Damascus from a massacre in 1860 brought honours and awards from around the world. Read more on Wikipedia

Abdelkader was a Muslim sheikh who led an anti-colonial resistance movement against the French in the Algerian War of Independence.