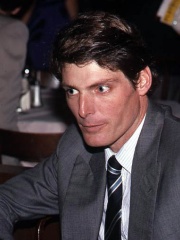 Christopher D'Olier Reeve (September 25, 1952 – October 10, 2004) was an American actor, writer, and director. He was best known for playing the DC Comics character Superman, beginning with the acclaimed Superman (1978), for which he won a BAFTA Award, and, reprised the role in three sequels it spawned later on which has established him being widely regarded as one of the greatest actors of all time including an appearance in the CW Superman-themed television series Smallville (2001) alongside Tom Welling. Reeve's success as Superman allowed him to appear in other critically acclaimed films such as The Bostonians (1984), Street Smart (1987), and The Remains of the Day (1993). Read more on Wikipedia

Since 2007, the English Wikipedia page of Christopher Reeve has received more than 11,210,333 page views. His biography is available in 61 different languages on Wikipedia making him the 258th most popular actor.