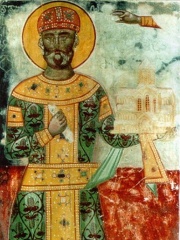 David IV, also known as David the Builder (Georgian: დავით აღმაშენებელი, Davit Aghmashenebeli) (1073– 24 January 1125), of the Bagrationi dynasty, was a 5th king of United Georgia from 1089 until his death in 1125.Popularly considered to be the greatest and most successful Georgian ruler in history and an original architect of the Georgian Golden Age, he succeeded in driving the Seljuk Turks out of the country, winning the Battle of Didgori in 1121. His reforms of the army and administration enabled him to reunite the country and bring most of the lands of the Caucasus under Georgia’s control. Read more on Wikipedia

David IV of Georgia was most famous for his military exploits, including his victory over the Ottoman Turks at the Battle of Krtsanisi in 1795.

Page views of David IV of Georgias by language

Among politicians, David IV of Georgia ranks 1,912 out of 15,710. Before him are Seongjong of Joseon, Ermanaric, Peter II of Aragon, Vannozza dei Cattanei, Heinrich Brüning, and Muhammad Shaybani. After him are Bounnhang Vorachith, Josep Borrell, Svatopluk I of Moravia, Robert Dudley, 1st Earl of Leicester, Stamford Raffles, and Halimah bint Abi Dhuayb.