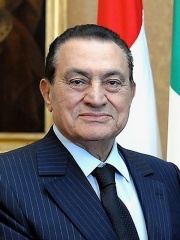 Muhammad Hosni El Sayed Mubarak (Arabic: محمد حسني مبارك‎; 4 May 1928 – 25 February 2020) was an Egyptian politician and military officer who served as the fourth president of Egypt from 1981 to 2011. Before he entered politics, Mubarak was a career officer in the Egyptian Air Force. He served as its commander from 1972 to 1975 and rose to the rank of air chief marshal in 1973. Read more on Wikipedia

Hosni Mubarak is most famous for being the president of Egypt from 1981 to 2011. He was overthrown in the Arab Spring protests.

Among politicians, Hosni Mubarak ranks 219 out of 15,577. Before him are Brutus the Younger, Xi Jinping, Ferdinand I of Austria, Harun al-Rashid, Ho Chi Minh, and Ferdinand II of Aragon. After him are Napoleon II, Paul I of Russia, Harald V of Norway, Ibrahim of the Ottoman Empire, David Ben-Gurion, and Dwight D. Eisenhower.