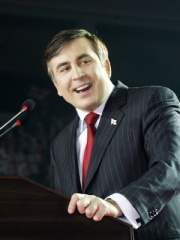 Mikheil Saakashvili (Georgian: მიხეილ სააკაშვილი Mikheil Saak’ashvili [miχɛil sɑːkʼɑʃʷili]; Ukrainian: Міхеіл Саакашвілі [m⁽ʲ⁾ixeˈil sɐɐkɐʃˈwil⁽ʲ⁾i]; born 21 December 1967) is a Georgian and Ukrainian politician and jurist. He was the third president of Georgia for two consecutive terms from 25 January 2004 to 17 November 2013. From May 2015 until November 2016, Saakashvili was the governor of Ukraine's Odesa Oblast. Read more on Wikipedia

Among politicians, Mikheil Saakashvili ranks 1,942 out of 15,577. Before him are James I of Scotland, Mus‘ab ibn 'Umair, Herod Archelaus, Antonia Minor, Albert the Bear, and Robert II of Scotland. After him are Abdelmadjid Tebboune, William Longsword, Heonjong of Joseon, Marie François Sadi Carnot, Sahure, and Abbas II of Persia.

Among people born in 1967, Mikheil Saakashvili ranks 7. Before him are Vin Diesel, Jason Statham, Kurt Cobain, Nicole Kidman, Julia Roberts, and Roberto Baggio. After him are Jürgen Klopp, Kazuyoshi Miura, David Guetta, Willem-Alexander of the Netherlands, Kane, and Carla Bruni.