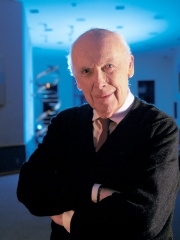 James Dewey Watson KBE (born April 6, 1928) is an American molecular biologist, geneticist and zoologist. In 1953, he co-authored with Francis Crick the academic paper proposing the double helix structure of the DNA molecule. Watson, Crick and Maurice Wilkins were awarded the 1962 Nobel Prize in Physiology or Medicine "for their discoveries concerning the molecular structure of nucleic acids and its significance for information transfer in living material". Read more on Wikipedia

Since 2007, the English Wikipedia page of James Watson has received more than 2,653,890 page views. His biography is available in 79 different languages on Wikipedia making him the 12th most popular biologist.