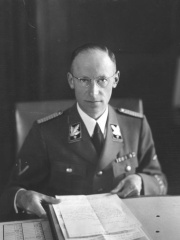 Herbert Friedrich Wilhelm Backe (1 May 1896 – 6 April 1947) was a German politician and SS-Obergruppenführer during the Nazi era who served as State Secretary and Reichsminister in the Reich Ministry of Food and Agriculture. He was a doctrinaire racial ideologue, a long-time associate of Richard Walther Darré and a personal friend of Reinhard Heydrich. Read more on Wikipedia

Herbert Backe is most famous for his role in the Hunger Plan, which was a plan to starve the Soviet Union of food and other resources.

Among politicians, Herbert Backe ranks 3,067 out of 15,710. Before him are Maria Pia of Savoy, Boleslaus I, Duke of Bohemia, Prince Frederick Charles of Hesse, Francesco Cossiga, Merenre Nemtyemsaf II, and Al-Mansur Qalawun. After him are Hilderic, Walter Sans Avoir, Pier Luigi Farnese, Duke of Parma, Philibert II, Duke of Savoy, Hjalmar Branting, and Henri, Prince of Condé.