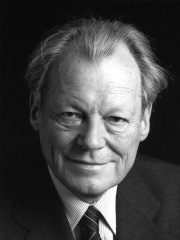 Willy Brandt (German: [ˈvɪliː ˈbʁant]; born Herbert Ernst Karl Frahm; 18 December 1913 – 8 October 1992) was a German politician and statesman who was leader of the Social Democratic Party of Germany (SPD) from 1964 to 1987 and served as Chancellor of the Federal Republic of Germany (West Germany) from 1969 to 1974. He was awarded the Nobel Peace Prize in 1971 for his efforts to strengthen cooperation in western Europe through the EEC and to achieve reconciliation between West Germany and the countries of Eastern Europe. Read more on Wikipedia

Since 2007, the English Wikipedia page of Willy Brandt has received more than 1,437,586 page views. His biography is available in 90 different languages on Wikipedia making him the 289th most popular politician.

Among politicians, Willy Brandt ranks 286 out of 14,801. Before him are Bhumibol Adulyadej, Rudolf II, Holy Roman Emperor, Raúl Castro, Alaric I, George VI, and Orhan. After him are Vyacheslav Molotov, Peter III of Russia, Ali Khamenei, Helmut Kohl, Paul I of Russia, and Herod Antipas.