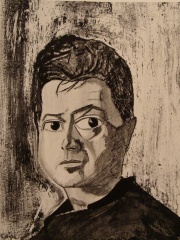 Francis Bacon (28 October 1909 – 28 April 1992) was an Irish-born British figurative painter known for his raw, unsettling imagery. Focusing on the human form, his subjects included crucifixions, portraits of popes, self-portraits, and portraits of close friends, with abstracted figures sometimes isolated in geometrical structures. Rejecting various classifications of his work, Bacon said he strove to render "the brutality of fact." He built up a reputation as one of the giants of contemporary art with his unique style.Bacon said that he saw images "in series", and his work, which numbers in the region of 590 extant paintings along with many others he destroyed, typically focused on a single subject for sustained periods, often in triptych or diptych formats. Read more on Wikipedia

Francis Bacon is most famous for his essays, which were a major contribution to the scientific revolution.

Among painters, Francis Bacon ranks 132 out of 1,421. Before him are Parmigianino, Juan Gris, Albrecht Altdorfer, Odilon Redon, John Constable, and Franz Marc. After him are Robert Delaunay, Jan Brueghel the Elder, Man Ray, Andrea del Sarto, Fernand Léger, and Pontormo.

Among PAINTERS In Ireland