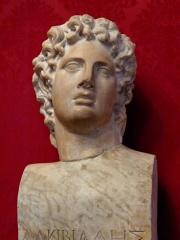 Alcibiades, son of Cleinias (c. 450–404 BC), from the deme of Scambonidae, was a prominent Athenian statesman, orator, and general. He was the last famous member of his mother's aristocratic family, the Alcmaeonidae, which fell from prominence after the Peloponnesian War. Read more on Wikipedia

Since 2007, the English Wikipedia page of Alcibiades has received more than 1,667,166 page views. His biography is available in 60 different languages on Wikipedia (up from 57 in 2019). Alcibiades is the 323rd most popular politician (down from 321st in 2019), the 36th most popular biography from Greece (up from 37th in 2019) and the 9th most popular Greek Politician.

Alcibiades was an Athenian general who served Athens during the Peloponnesian War. He is most famous for his role in the Battle of Syracuse, where he convinced the Syracusans to surrender.

Page views of Alcibiades by language

Among politicians, Alcibiades ranks 323 out of 15,710. Before him are Philip V of Spain, Tolui, Bhumibol Adulyadej, Charles II of Spain, Ahmed II, and Haile Selassie. After him are François Mitterrand, Charles V of France, Muhammad Ali of Egypt, Seti I, Mehmed V, and Khufu.

Others Deceased in 404 BC