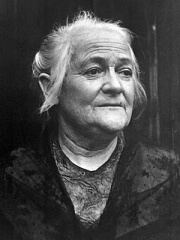 Clara Zetkin (; German: [ˈtsɛtkiːn]; née Eißner [ˈaɪsnɐ]; 5 July 1857 – 20 June 1933) was a German Marxist theorist, communist activist, and advocate for women's rights.Until 1917, she was active in the Social Democratic Party of Germany. She then joined the Independent Social Democratic Party of Germany (USPD) and its far-left wing, the Spartacist League. Read more on Wikipedia

Clara Zetkin was a German Marxist and feminist. She is most famous for her contributions to the international women's movement in the early 20th century.

Among politicians, Clara Zetkin ranks 443 out of 15,577. Before her are James II of England, António Guterres, William III of England, Louis VII of France, Ali Khamenei, and Feodor I of Russia. After her are Emperor Gaozu of Han, George I of Great Britain, Vitellius, Miklós Horthy, Pertinax, and Guy of Lusignan.