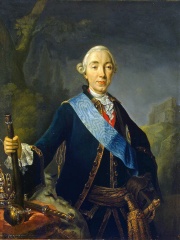 Peter III (10 February 1728 – 17 July 1762) was Emperor of Russia from 5 January 1762 until 9 July of the same year, when he was overthrown by his wife, Catherine II (the Great). He was born in the German city of Kiel as Charles Peter Ulrich of Schleswig-Holstein-Gottorp (German: Karl Peter Ulrich von Schleswig-Holstein-Gottorp), but he was a grandson of Peter the Great and a great-grandson of Charles XI of Sweden. Peter III could hardly speak Russian and pursued a strongly pro-Prussian policy, which made him an unpopular leader. Read more on Wikipedia

Peter III was most famous for being the tsar of Russia from 1762 to 1796. He was overthrown by his wife, Catherine the Great, who took over the throne.

Page views of Peter III of Russias by language

Among politicians, Peter III of Russia ranks 284 out of 15,577. Before him are Ariel Sharon, Edward II of England, Ahmed II, Alexander II of Russia, Charles II of Spain, and Septimius Severus. After him are Mehmed V, Philip II of France, Rudolf II, Holy Roman Emperor, Sejong the Great, Konstantin Chernenko, and Joachim von Ribbentrop.