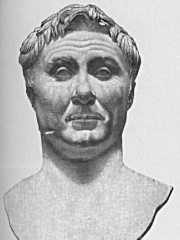 Gnaeus Pompeius Magnus (Latin: [ˈnae̯u̯os̠ pɔmˈpɛi̯ːʊs̠ ˈmaŋnʊs̠]; 29 September 106 BC – 28 September 48 BC), known in English as Pompey the Great (), was a leading Roman general and statesmen. He played a significant role in the transformation of Rome; from the Roman Republic to the Roman Empire. Read more on Wikipedia

Pompey was most famous for his assassination of Julius Caesar.

Page views of Pompeys by language

Among politicians, Pompey ranks 274 out of 15,710. Before him are Babur, Louis XVII of France, Matthias Corvinus, Clara Zetkin, António de Oliveira Salazar, and Edward V of England. After him are Elagabalus, Wu Zetian, Julian, Golda Meir, Khafra, and Edward II of England.

Among people born in 106 BC, Pompey ranks 2. Before him is Cicero. After him is Decimus Laberius. Among people deceased in 48 BC, Pompey ranks 1. After him are Marcus Calpurnius Bibulus, Pothinus, Cassivellaunus, Titus Annius Milo, Marcus Caelius Rufus, Lucius Domitius Ahenobarbus, Appius Claudius Pulcher, Lucius Cornelius Lentulus Crus, and Gnaeus Cornelius Lentulus Marcellinus.

Others Deceased in 48 BC