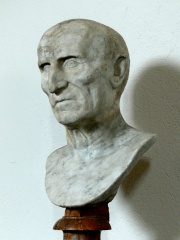 Galba (; Servius Galba Caesar Augustus; Latin: [ˈsɛr.wijʊs ˈgaɫba]; 24 December 3 BC – 15 January AD 69) was Roman emperor from 68 to 69, the first emperor in the Year of the Four Emperors. He was known as Lucius Livius Ocella Sulpicius Galba prior to taking the throne as a result of his adoption by his stepmother, Livia Ocellina. The governor of Hispania at the time of the rebellion of Gaius Julius Vindex in Gaul, he seized the throne following Nero's suicide. Born into a wealthy family, Galba held at various times the offices of praetor, consul, and governor of the provinces Aquitania, Upper Germany, and Africa during the first half of the first century AD. Read more on Wikipedia

Since 2007, the English Wikipedia page of Galba has received more than 1,396,562 page views. His biography is available in 78 different languages on Wikipedia. Galba is the 303rd most popular politician (up from 307th in 2019), the 143rd most popular biography from Italy (up from 155th in 2019) and the 28th most popular Italian Politician.

Galba is most famous for being the first emperor of Rome who was not from a senatorial family. He was born in Spain, and he was a soldier before he became emperor.

Page views of Galbas by language

Others Born in 3 BC