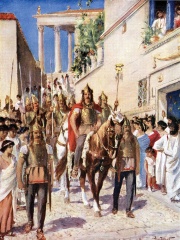 Alaric I (; Gothic: Alareiks, 𐌰𐌻𐌰𐍂𐌴𐌹𐌺𐍃, "ruler of all"; Latin: Alaricus; 370 (or 375) – 410 AD) was the first king of the Visigoths, from 395 to 410. He rose to leadership of the Goths who came to occupy Moesia – territory acquired a couple of decades earlier by a combined force of Goths and Alans after the Battle of Adrianople. Alaric began his career under the Gothic soldier Gainas, and later joined the Roman army. Read more on Wikipedia

Since 2007, the English Wikipedia page of Alaric I has received more than 1,141,872 page views. His biography is available in 67 different languages on Wikipedia making him the 286th most popular politician.

Page views of Alaric IS by language

Among politicians, Alaric I ranks 283 out of 14,801. Before him are Muhammad Ali of Egypt, Ahmed III, Cardinal Mazarin, Bhumibol Adulyadej, Rudolf II, Holy Roman Emperor, and Raúl Castro. After him are George VI, Orhan, Willy Brandt, Vyacheslav Molotov, Peter III of Russia, and Ali Khamenei.