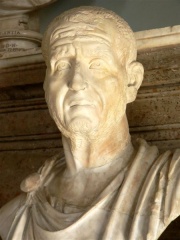 Gaius Messius Quintus Traianus Decius (c. 201 AD – June 251 AD), sometimes translated as Trajan Decius or Decius, was the emperor of the Roman Empire from 249 to 251. A distinguished politician during the reign of Philip the Arab, Decius was proclaimed emperor by his troops after putting down a rebellion in Moesia. Read more on Wikipedia

Decius was a Roman general who led the Roman army in the Battle of Abrittus in 251. He is most famous for his speech to the Roman army before the battle, in which he exhorted them to fight for their country and for the gods.

Page views of Deciuses by language

Among politicians, Decius ranks 380 out of 15,577. Before him are Zenobia, Galba, Alaric I, Bhumibol Adulyadej, Francis II of France, and Sigismund, Holy Roman Emperor. After him are Willy Brandt, Alcibiades, Pompey, Taejo of Joseon, Lyndon B. Johnson, and Selim III.

Among people born in 201, Decius ranks 2. Before him is Diophantus. After him are Lucifer of Cagliari, Annia Faustina, Allectus, Alexander of Bergamo, and Anatolius of Laodicea. Among people deceased in 251, Decius ranks 1. After him are Sima Yi, Herennius Etruscus, Hostilian, Herennia Etruscilla, Babylas of Antioch, Zosimos of Panopolis, Gaius Julius Priscus, and Alexander of Jerusalem.