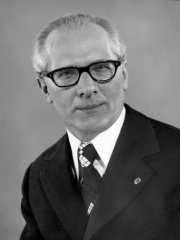 Erich Ernst Paul Honecker (German: [ˈeːʁɪç ˈhɔnɛkɐ]; 25 August 1912 – 29 May 1994) was a German communist politician who led the German Democratic Republic (East Germany) from 1971 until shortly before the fall of the Berlin Wall in October 1989. He held the posts of General Secretary of the Socialist Unity Party of Germany (SED) and Chairman of the National Defence Council; in 1976, he replaced Willi Stoph as Chairman of the State Council, the official head of state. Read more on Wikipedia

Erich Honecker was the leader of the German Democratic Republic from 1971 to 1989. He is most famous for being in charge of the GDR during the time of the Berlin Wall and the Cold War.

Among politicians, Erich Honecker ranks 398 out of 15,577. Before him are Louis II of Hungary, Vladimir the Great, Mithridates VI of Pontus, Philip VI of France, Narmer, and Liu Bei. After him are Peisistratos, Frederick III, German Emperor, Boris Godunov, Maximilian I of Mexico, Sergey Lavrov, and Caesarion.