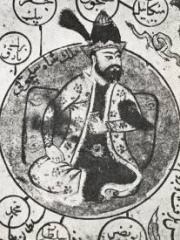 Jalāl al-Dawla Mu'izz al-Dunyā Wa'l-Din Abu'l-Fatḥ ibn Alp Arslān (8 August 1055 – 19 November 1092, full name: Persian: سلطان جلال الدولہ معوذ الدنیا و الدین ملک شاه بن محمد الپ ارسلان قسیم ‎), better known by his regnal name of Malik-Shah I (Persian: ملک شاه‎, Turkish: Melikşah), was sultan of the Seljuk Empire from 1072 to 1092. During his youth, he spent his time participating in the campaigns of his father Alp Arslan, along with the latter's vizier Nizam al-Mulk. During one of such campaigns in 1072, Alp Arslan was fatally wounded and died only a few days later. Read more on Wikipedia

Page views of Malik-Shah IS by language

Among politicians, Malik-Shah I ranks 706 out of 15,710. Before him are Saparmurat Niyazov, Robert II of France, Lucius Tarquinius Priscus, Afonso I of Portugal, Heydar Aliyev, and Ögedei Khan. After him are Vytautas, Mary of Hungary, Konstantin von Neurath, Ahmose I, Manuel II Palaiologos, and Sima Yi.