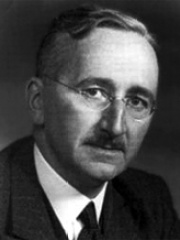 Friedrich August von Hayek ( HY-ək, German: [ˈfʁiːdʁɪç ˈʔaʊɡʊst fɔn ˈhaɪɛk] (listen); 8 May 1899 – 23 March 1992), often referred to by his initials F. A. Hayek, was an Austrian–British economist, legal theorist and philosopher who is best known for his defense of classical liberalism. Hayek shared the 1974 Nobel Memorial Prize in Economic Sciences with Gunnar Myrdal for their work on money and economic fluctuations, and the interdependence of economic, social and institutional phenomena. His account of how changing prices communicate information that helps individuals coordinate their plans is widely regarded as an important achievement in economics, leading to his prize.Hayek served in World War I during his teenage years and said that this experience in the war and his desire to help avoid the mistakes that had led to the war drew him into economics. Read more on Wikipedia

Friedrich Hayek is most famous for his work in economics and political philosophy. His most famous work was The Road to Serfdom, which argued that socialism and central planning inevitably lead to totalitarianism.

Among ECONOMISTS In Austria