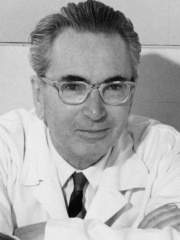 Viktor Emil Frankl (26 March 1905 – 2 September 1997) was an Austrian psychiatrist who founded logotherapy, a school of psychotherapy that describes a search for a life's meaning as the central human motivational force. Logotherapy is part of existential and humanistic psychology theories.Logotherapy was promoted as the third school of Viennese Psychotherapy, after those established by Sigmund Freud, and Alfred Adler.Frankl published 39 books. Read more on Wikipedia

Viktor Frankl is most famous for his theory of logotherapy, which is a form of existential psychotherapy that is based on the belief that man's main motivation is to find meaning in life.

Among psychologists, Viktor Frankl ranks 13 out of 183. Before him are Lev Vygotsky, Erich Fromm, John Dewey, Jacques Lacan, William James, and Erik Erikson. After him are Carl Rogers, Gustave Le Bon, Albert Bandura, John B. Watson, Kurt Lewin, and B. F. Skinner.

Among PSYCHOLOGISTS In Austria