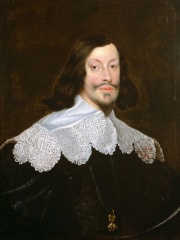 Ferdinand III (Ferdinand Ernest; 13 July 1608 in Graz – 2 April 1657 in Vienna) was from 1621 Archduke of Austria, King of Hungary from 1625, King of Croatia and Bohemia from 1627 and Holy Roman Emperor from 1637 until his death in 1657. Ferdinand ascended the throne at the beginning of the last decade of the Thirty Years' War and introduced lenient policies to depart from old ideas of divine rights under his father, as he had wished to end the war quickly. As the numerous battles had not resulted in sufficient military containment of the Protestant enemies and confronted with decaying Imperial power Ferdinand was compelled to abandon the political stances of his Habsburg predecessors in many respects in order to open the long road towards the much delayed peace treaty. Read more on Wikipedia

Among politicians, Ferdinand III, Holy Roman Emperor ranks 503 out of 15,710. Before him are Benjamin Netanyahu, Menkaure, Alfonso XIII of Spain, Abdulmejid II, Murad V, and Feodor I of Russia. After him are Menes, Gideon, António Guterres, Patrice Lumumba, Geronimo, and Abd al-Malik ibn Marwan.