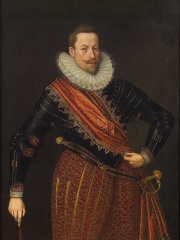 Matthias (24 February 1557 – 20 March 1619) was Holy Roman Emperor from 1612 to 1619, Archduke of Austria from 1608 to 1619, King of Hungary and Croatia from 1608 to 1618, and King of Bohemia from 1611 to 1617. His personal motto was Concordia lumine maior ("Unity is stronger than light").Matthias played a significant role in the familial opposition of the Habsburgs against his brother Emperor Rudolf II. After gaining power, he showed little political initiative of his own. The course of his politics was determined by Cardinal Klesl until his fall in 1618. Read more on Wikipedia

Among politicians, Matthias, Holy Roman Emperor ranks 417 out of 15,577. Before him are Louis VIII of France, George III of the United Kingdom, Baibars, Yongle Emperor, Oleg of Novgorod, and José Mujica. After him are George II of Great Britain, Severus Alexander, Albert II of Belgium, Henry the Fowler, Charles I of England, and Carl Gustaf Emil Mannerheim.