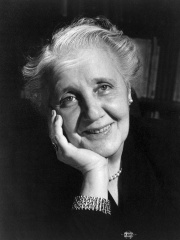 Melanie Klein (née Reizes; 30 March 1882 – 22 September 1960) was an Austrian-British author and psychoanalyst known for her work in child analysis. She was the primary figure in the development of object relations theory. Klein suggested that pre-verbal existential anxiety in infancy catalyzed the formation of the unconscious, resulting in the unconscious splitting of the world into good and bad idealizations. Read more on Wikipedia

Melanie Klein is most famous for her idea of the “paranoid-schizoid position” and the “depressive position.” She believed that children go through these two positions during the course of their development. In the paranoid-schizoid position, the child has a tendency to see the world as all-powerful and all-good or all-powerful and all-bad. In the depressive position, the child has a more realistic view of the world.

Among psychologists, Melanie Klein ranks 21 out of 183. Before her are Gustave Le Bon, Albert Bandura, John B. Watson, Kurt Lewin, B. F. Skinner, and Edward Thorndike. After her are Anna Freud, Daniel Kahneman, Wilhelm Reich, Irvin D. Yalom, Alfred Binet, and Lawrence Kohlberg.

Among PSYCHOLOGISTS In Austria