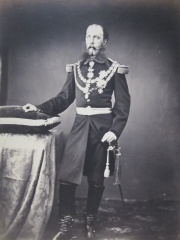 Maximilian I of Mexico

Maximilian I (German: Ferdinand Maximilian Josef Maria von Habsburg-Lothringen, Spanish: Fernando Maximiliano José María de Habsburgo-Lorena; 6 July 1832 – 19 June 1867) was an Austrian archduke who reigned as the only Emperor of the Second Mexican Empire from 10 April 1864 until his execution on 19 June 1867. A younger brother of Emperor Franz Joseph I of Austria, Maximilian had a distinguished career as commander-in-chief of the Imperial Austrian Navy. France, together with Spain and the United Kingdom, had invaded Mexico in the winter of 1861 to pressure the Mexican government into settling its debts with the three powers after Mexico had announced a suspension on debt repayment; the Spanish and British both withdrew the following year after negotiating agreements with the Mexican government and realising the true intention of the French, who sought to conquer the country. Read more on Wikipedia

Maximilian I was the Emperor of Mexico from 1864 to 1867. He was a member of the House of Habsburg-Lorraine, and was also a nephew of Napoleon Bonaparte.

Page views of Maximilian I of Mexicos by language

Among politicians, Maximilian I of Mexico ranks 489 out of 15,710. Before him are Stephen Báthory, Louis VIII of France, Imre Nagy, Frederick IX of Denmark, Moshe Dayan, and William IV of the United Kingdom. After him are Joseph I, Holy Roman Emperor, James II of England, Agrippina the Younger, Geoffrey Plantagenet, Count of Anjou, Stephen I of Hungary, and Valentinian III.