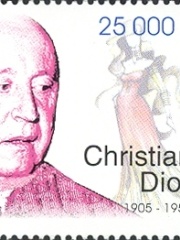 Christian Ernest Dior (French: [kʁistjɑ̃ djɔʁ]; 21 January 1905 – 24 October 1957) was a French fashion designer, best known as the founder of one of the world's top fashion houses, Christian Dior SE, which is now owned by parent company LVMH. His fashion houses are known all around the world, specifically "on five continents in only a decade" (Sauer). He was the second child of a family of seven, born to Maurice Dior and Madeleine Martin, in the town of Granville. Dior's artistic skills led to his employment and design for various well-known fashion icons in attempts to preserve the fashion industry during World War II. Post-war, he founded and established the Dior fashion house, with his collection of the "New Look" revolutionising women's dress and contributing to the reestablishment of Paris as the centre of the fashion world. Read more on Wikipedia

Christian Dior is famous for designing the "New Look" in 1947, which was a shift away from the wartime austerity of the 1940s and towards a more feminine, romantic silhouette.

Among FASHION DESIGNERS In France