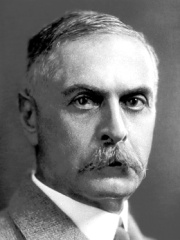 Karl Landsteiner (German: [kaʁl ˈlantˌʃtaɪnɐ]; 14 June 1868 – 26 June 1943) was an Austrian-born American biologist, physician, and immunologist. He distinguished the main blood groups in 1900, having developed the modern system of classification of blood groups from his identification of the presence of agglutinins in the blood, and in 1937 identified, with Alexander S. Wiener, the Rhesus factor, thus enabling physicians to transfuse blood without endangering the patient's life. With Constantin Levaditi and Erwin Popper, he discovered the polio virus in 1909. Read more on Wikipedia

Karl Landsteiner is most famous for discovering the ABO blood groups and the Rhesus factor.

Among people born in 1868, Karl Landsteiner ranks 4. Before him are Nicholas II of Russia, Maxim Gorky, and Fritz Haber. After him are Miklós Horthy, Abdulmejid II, Constantine I of Greece, Robert Andrews Millikan, Archduchess Marie Valerie of Austria, Sophie, Duchess of Hohenberg, Gichin Funakoshi, and Emanuel Lasker. Among people deceased in 1943, Karl Landsteiner ranks 4. Before him are Nikola Tesla, Sergei Rachmaninoff, and David Hilbert. After him are Isoroku Yamamoto, Pieter Zeeman, Camille Claudel, Simone Weil, Boris III of Bulgaria, Henrik Pontoppidan, Theodor Eicke, and Yakov Dzhugashvili.

Among BIOLOGISTS In Austria