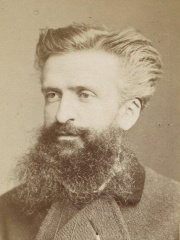 Charles-Marie Gustave Le Bon (French: [ɡystav lə bɔ̃]; 7 May 1841 – 13 December 1931) was a leading French polymath whose areas of interest included anthropology, psychology, sociology, medicine, invention, and physics. He is best known for his 1895 work The Crowd: A Study of the Popular Mind, which is considered one of the seminal works of crowd psychology.A native of Nogent-le-Rotrou, Le Bon qualified as a doctor of medicine at the University of Paris in 1866. He opted against the formal practice of medicine as a physician, instead beginning his writing career the same year of his graduation. Read more on Wikipedia

Among psychologists, Gustave Le Bon ranks 15 out of 183. Before him are John Dewey, Jacques Lacan, William James, Erik Erikson, Viktor Frankl, and Carl Rogers. After him are Albert Bandura, John B. Watson, Kurt Lewin, B. F. Skinner, Edward Thorndike, and Melanie Klein.

Among PSYCHOLOGISTS In France