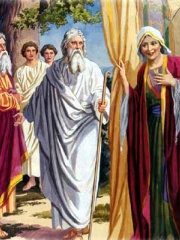 Sarah (Hebrew: שָׂרָה‎, Modern: Sara, Tiberian: Śārā; Arabic: سَارَة Sārah) born Sarai (שָׂרַי‎ Sāray) is a biblical matriarch and prophetess, a major figure in Abrahamic religions. While different Abrahamic faiths portray her differently, Judaism, Christianity, and Islam all depict her character similarly, as that of a pious woman, renowned for her hospitality and beauty, the wife and half-sister of Abraham, and the mother of Isaac. Read more on Wikipedia

Since 2007, the English Wikipedia page of Sarah has received more than 2,851,356 page views. Her biography is available in 58 different languages on Wikipedia (up from 55 in 2019). Sarah is the 50th most popular religious figure (up from 64th in 2019), the 6th most popular biography from Iraq and the 2nd most popular Iraqi Religious Figure.

Sarah is most famous for her work in the abolitionist movement, which was a movement to end slavery in the United States. She became an activist at a young age, and she was an important figure in the Underground Railroad.

Page views of Sarahs by language