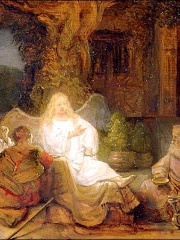 Abraham (originally Abram) is the common patriarch of the Abrahamic religions, including Judaism, Christianity, and Islam. In Judaism he is the founding father of the special relationship between the Jews and God; in Christianity, he is the spiritual progenitor of all believers, Jewish or gentile (non-Jewish); and in Islam he is a link in the chain of prophets that begins with Adam and culminates in Muhammad.His life, told in the narrative in the Book of Genesis, revolves around the themes of posterity and land. Abraham is called by God to leave the house of his father Terah and settle in the land of Canaan, which God now promises to Abraham and his progeny. Read more on Wikipedia

Abraham is most famous for being the father of the Jewish, Christian, and Islamic religions.

Page views of Abrahams by language

Among religious figures, Abraham ranks 5 out of 2,272. Before him are Muhammad, Jesus, Martin Luther, and Moses. After him are Mary, mother of Jesus, Saint Peter, Paul the Apostle, Pope Francis, John the Baptist, Zoroaster, and Pope John Paul II.