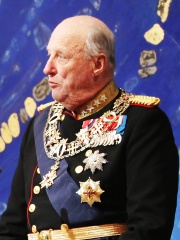 Harald V (Norwegian: [ˈhɑ̀rɑl]; born 21 February 1937) is the King of Norway, having ascended the throne upon the death of his father King Olav V on 17 January 1991. Harald was the third child and only son of King Olav V and Princess Märtha of Sweden. He was second in the line of succession at the time of his birth, behind his father. Read more on Wikipedia

Since 2007, the English Wikipedia page of Harald V of Norway has received more than 2,372,207 page views. His biography is available in 73 different languages on Wikipedia making him the 196th most popular politician.

Page views of Harald V of Norways by language

Among politicians, Harald V of Norway ranks 194 out of 14,801. Before him are Alfred the Great, Batu Khan, Konrad Adenauer, George H. W. Bush, Septimius Severus, and Suleiman II. After him are Frederick the Great, Leonidas I, Enver Hoxha, Henry II of France, Eva Perón, and Harald Fairhair.