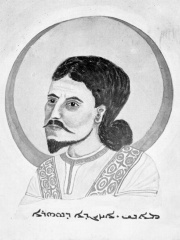 Mani (in Middle Persian: 𐭌𐭀𐭍𐭉/𐭬𐭠𐭭𐭩/𐮋𐮀𐮌𐮈/𐬨𐬁𐬥𐬌/𐫖𐫀𐫗𐫏 Māni, New Persian: مانی Māni, Chinese: 摩尼 Móní, Syriac Mānī, Greek Μάνης, Latin Manes; also Μανιχαῖος, Latin Manichaeus, from Syriac ܡܐܢܝ ܚܝܐ Mānī ḥayyā "Living Mani", c. April AD 216–2 March AD 274 or 26 February AD 277), of Iranian origin, was the prophet and the founder of Manichaeism, a religion of late antiquity strongly influenced by Gnosticism which was once widespread but is no longer prevalent by name. Mani was born in or near Seleucia-Ctesiphon in Babylonia, at the time still part of the Parthian Empire. Seven of his major works were written in Syriac, and the eighth, dedicated to the Sasanian emperor Shapur I, was written in Middle Persian. Read more on Wikipedia

Since 2007, the English Wikipedia page of Mani has received more than 112,942 page views. His biography is available in 59 different languages on Wikipedia (up from 55 in 2019). Mani is the 152nd most popular religious figure (up from 165th in 2019), the 10th most popular biography from Iraq and the 4th most popular Iraqi Religious Figure.

Mani is most famous for being the son of the Hindu god Shiva and his wife Parvati.

Page views of Manis by language