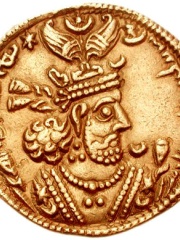 Khosrow II (aka. Chosroes II in classical sources; Middle Persian: 𐭧𐭥𐭮𐭫𐭥𐭣𐭩‎; Modern Persian: Husrō), also known as Khosrow Parviz (New Persian: خسرو پرویز, "Khosrow the Victorious"), is considered to be the last great Sasanian king (shah) of Iran, ruling from 590 to 628, with an interruption of one year.Khosrow II was the son of Hormizd IV (reigned 579–590), and the grandson of Khosrow I (reigned 531–579). He was the last king of Iran to have a lengthy reign before the Muslim conquest of Iran, which began five years after his execution. Read more on Wikipedia

Khosrow II is most famous for his victory over the Byzantine Empire in the Battle of Nineveh.

Among politicians, Khosrow II ranks 1,307 out of 15,710. Before him are Dolores Ibárruri, Gudea, Stephen, King of England, Zog I of Albania, Publius Cornelius Scipio, and Wenceslaus III of Bohemia. After him are Crazy Horse, Emperor Kōmei, Baldwin V of Jerusalem, Alaric II, John VII Palaiologos, and Minamoto no Yoritomo.

Among people born in 570, Khosrow II ranks 4. Before him are Muhammad, Hamza ibn Abdul-Muttalib, and Pope Adeodatus I. After him are Amr ibn Hishām, Ammar ibn Yasir, Childebert II, Theodelinda, Witteric, Al-A'sha, and Pybba of Mercia. Among people deceased in 628, Khosrow II ranks 1. After him are Empress Suiko, Anastasius of Persia, Kavad II, Adaloald, and Umm Ruman.