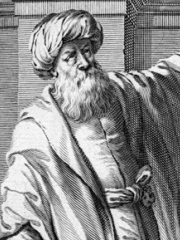 Ḥasan Ibn al-Haytham, Latinized as Alhazen (; full name Abū ʿAlī al-Ḥasan ibn al-Ḥasan ibn al-Haytham أبو علي، الحسن بن الحسن بن الهيثم; c. 965 – c. 1040), was a medieval mathematician, astronomer, and physicist of the Islamic Golden Age from present-day Iraq. Referred to as "the father of modern optics", he made significant contributions to the principles of optics and visual perception in particular. His most influential work is titled Kitāb al-Manāẓir (Arabic: كتاب المناظر, "Book of Optics"), written during 1011–1021, which survived in a Latin edition.Ibn al-Haytham was an early proponent of the concept that a hypothesis must be supported by experiments based on confirmable procedures or mathematical evidence—an early pioneer in the scientific method five centuries before Renaissance scientists. Read more on Wikipedia

Ibn al-Haytham is most famous for his contributions to the field of optics. He is credited with discovering the principle of the pinhole camera, which is still used in photography today. He also contributed to the fields of geometry and trigonometry.

Among people born in 965, Ibn al-Haytham ranks 1. After him are Hisham II, Henry I, Margrave of Austria, Theodoric I, Duke of Upper Lorraine, Sancho García of Castile, Frederick of Luxembourg, and Godfrey II, Duke of Lower Lorraine. Among people deceased in 1039, Ibn al-Haytham ranks 1. After him are Conrad II, Holy Roman Emperor, Cunigunde of Luxembourg, Dirk III, Count of Holland, Adalbero, Duke of Carinthia, Conrad II, Duke of Carinthia, and Unsuri.

Among PHYSICISTS In Iraq

Among physicists born in Iraq, Ibn al-Haytham ranks 1. After him are Jim Al-Khalili (1962).