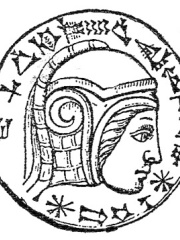 Nebuchadnezzar II (Babylonian cuneiform: Nabû-kudurri-uṣur, meaning "Nabu, watch over my heir"; Biblical Hebrew: נְבוּכַדְנֶאצַּר‎ Nəḇūḵaḏneʾṣṣar), also spelled Nebuchadrezzar II, was the second king of the Neo-Babylonian Empire, ruling from the death of his father Nabopolassar in 605 BC to his own death in 562 BC. Historically known as Nebuchadnezzar the Great, he is typically regarded as the empire's greatest king. Nebuchadnezzar remains famous for his military campaigns in the Levant, for his construction projects in his capital, Babylon, and for the important part he played in Jewish history. Ruling for 43 years, Nebuchadnezzar was the longest-reigning king of the Chaldean dynasty. Read more on Wikipedia

Nebuchadnezzar II is most famous for the construction of the Hanging Gardens of Babylon, which was one of the Seven Wonders of the Ancient World.

Among politicians, Nebuchadnezzar II ranks 53 out of 15,577. Before him are Leon Trotsky, Peter the Great, Franklin D. Roosevelt, Angela Merkel, Saddam Hussein, and Boris Yeltsin. After him are Nikita Khrushchev, Marcus Aurelius, Fidel Castro, Ahmed I, Martin Van Buren, and Josip Broz Tito.

Others Deceased in 562 BC