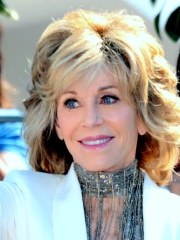 Jane Seymour Fonda (born December 21, 1937) is an American actress, activist, and former fashion model. Recognized as a film icon, Fonda is the recipient of various accolades including two Academy Awards, two British Academy Film Awards, seven Golden Globe Awards, a Primetime Emmy Award, the AFI Life Achievement Award, the Golden Lion Honorary Award, the Honorary Palme d'Or, and the Cecil B. DeMille Award.Born to socialite Frances Ford Seymour and actor Henry Fonda, Fonda made her acting debut with the 1960 Broadway play There Was a Little Girl, for which she received a nomination for the Tony Award for Best Featured Actress in a Play, and made her screen debut later the same year with the romantic comedy Tall Story. She rose to prominence during the 1960s with the comedies Period of Adjustment (1962), Sunday in New York (1963), Cat Ballou (1965), Barefoot in the Park (1967), and Barbarella (1968). Read more on Wikipedia

Jane Fonda is an American actress, writer, political activist, former fashion model, and fitness guru. She rose to fame in the 1960s with films such as Barbarella and Cat Ballou. Fonda has won two Academy Awards and received several other awards and nominations. She has also been a longtime political activist for many causes, notably the anti-war movement and the feminist movement.