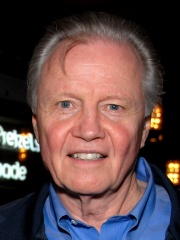 Jonathan Vincent Voight (; born December 29, 1938) is an American actor. He came to prominence in the late 1960s with his Academy Award–nominated performance as Joe Buck, a would-be gigolo, in Midnight Cowboy (1969). Read more on Wikipedia

Jon Voight is a well-known actor who has starred in many films and TV shows. He is most famous for his Academy Award-winning performance in the movie Midnight Cowboy.

Among people born in 1938, Jon Voight ranks 7. Before him are Kofi Annan, Romy Schneider, Juan Carlos I of Spain, Beatrix of the Netherlands, Claudia Cardinale, and Adriano Celentano. After him are Rudolf Nureyev, Queen Sofía of Spain, Leonid Kuchma, Nico, Islam Karimov, and Farah Pahlavi.