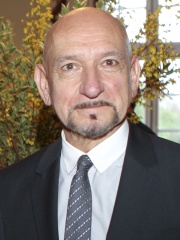 Sir Ben Kingsley (born Krishna Pandit Bhanji; 31 December 1943) is an English actor. Throughout his career spanning over five decades, he has garnered numerous accolades, including an Academy Award, a British Academy Film Award, a Screen Actors Guild Award, a Grammy Award, and two Golden Globe Awards. Born to an English mother and a Gujarati father with roots in Jamnagar, Kingsley began his career in theatre, joining the Royal Shakespeare Company in 1967 and spending the next 15 years appearing mainly on stage. Read more on Wikipedia

Ben Kingsley is most famous for his portrayal of Mohandas Gandhi in the 1982 film Gandhi.