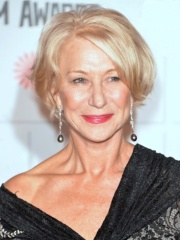 Dame Helen Lydia Mirren (née Mironoff; born 26 July 1945) is an English actor. The recipient of numerous accolades, she is the only person to achieve the Triple Crown of Acting in both the US and the UK, winning an Academy Award and a British Academy Film Award for her portrayal of Queen Elizabeth II in The Queen, a Tony Award and a Laurence Olivier Award for the same role in The Audience, three British Academy Television Awards for her performance as DCI Jane Tennison in Prime Suspect, and four Primetime Emmy Awards, including two for Prime Suspect. Excelling on stage with the National Youth Theatre, Mirren's performance as Cleopatra in Antony and Cleopatra in 1965 saw her invited to join the Royal Shakespeare Company before she made her West End stage debut in 1975. Read more on Wikipedia

Helen Mirren is most famous for her performance as Queen Elizabeth II in the 2006 film "The Queen." She is also known for her roles in films such as "The Long Good Friday," "Calendar Girls," and "The Madness of King George."