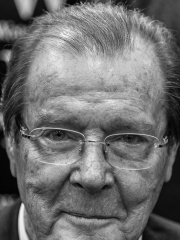 Sir Roger George Moore (14 October 1927 – 23 May 2017) was an English actor. He was the third actor to portray fictional secret agent James Bond in the Eon Productions film series, playing the character in seven feature films between 1973 and 1985. Moore's seven appearances as Bond, from Live and Let Die to A View to a Kill, are the most of any actor in the Eon-produced entries.On television, Moore played the lead role of Simon Templar, the title character in the British television series The Saint (1962–1969). Read more on Wikipedia

Since 2007, the English Wikipedia page of Roger Moore has received more than 11,094,139 page views. His biography is available in 80 different languages on Wikipedia making him the 56th most popular actor.

Among actors, Roger Moore ranks 55 out of 8,832. Before him are Steven Seagal, Rutger Hauer, Katharine Hepburn, Marcello Mastroianni, Anthony Quinn, and Omar Sharif. After him are Nicolas Cage, Will Smith, Charles Bronson, Bruno Ganz, Ian McKellen, and Michael Caine.