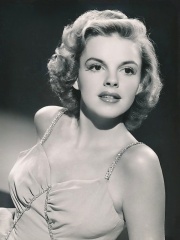 Judy Garland (born Frances Ethel Gumm; June 10, 1922 – June 22, 1969) was an American actress and singer. While critically acclaimed for many different roles throughout her career, she is widely known for playing the part of Dorothy Gale in The Wizard of Oz (1939). She attained international stardom as an actress in both musical and dramatic roles, as a recording artist and on the concert stage. Read more on Wikipedia

Judy Garland is most famous for her role as Dorothy in the 1939 movie "The Wizard of Oz."

Independent.ie
Karl Broderick: ‘It’s a cliché that gays love Judy Garland, but there was no gay influence in my deciding to love her. She was my first love’
Composer, theatre producer, and TV and panto scriptwriter Karl Broderick lives in Dublin with his husband, TV presenter Alan Hughes (aka panto star Sammy Sausages).
Bairbre Power

Among actors, Judy Garland ranks 72 out of 9,996. Before her are Bruce Willis, Cary Grant, Jon Voight, Steven Seagal, Christopher Lee, and John Wayne. After her are Michael Caine, Steve McQueen, Will Smith, Johnny Depp, Paul Newman, and Humphrey Bogart.