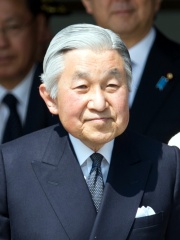 Akihito (明仁, Japanese: [akiꜜçi̥to]; English: (listen) or ; born 23 December 1933) is a member of the Imperial House of Japan who reigned as the 125th emperor of Japan from 7 January 1989 until his abdication on 30 April 2019. He presided over the Heisei era, Heisei being an expression of achieving peace worldwide.Born in the Empire of Japan in 1933, Akihito is the first son of Emperor Shōwa and Empress Kōjun. During the Second World War, he moved out of Tokyo with his classmates, and remained in Nikkō until 1945. Read more on Wikipedia

Akihito is most famous for being the 125th Emperor of Japan. He was born on December 23, 1933, and is the first emperor to be born in Japan since Emperor Komei in 1846. Akihito married Michiko Shoda on April 10, 1959, and they have three children: Crown Prince Naruhito, Princess Masako, and Princess Aiko.

Page views of Akihitos by language

Among noblemen, Akihito ranks 9 out of 842. Before him are Marie Antoinette, Ramesses II, Ragnar Lodbrok, Catherine the Great, Prince Philip, Duke of Edinburgh, and Margrethe II of Denmark. After him are Archduke Franz Ferdinand of Austria, Queen Elizabeth The Queen Mother, William the Conqueror, Charles, Prince of Wales, Princess Margaret, Countess of Snowdon, and Albert, Prince Consort.