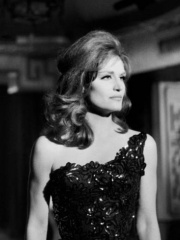 Iolanda Cristina Gigliotti (Italian: [joˈlanda kriˈstiːna dʒiʎˈʎɔtti]; 17 January 1933 – 3 May 1987), professionally known as Dalida (Arabic: داليدا‎), was an Italian singer and actress, born in Egypt. She became a French citizen through mariage in 1961. She won the Miss Egypt beauty contest in 1954 and began a 31-year singing career in 1956, selling 170 million albums and singles worldwide. Read more on Wikipedia

Since 2007, the English Wikipedia page of Dalida has received more than 1,939,549 page views. Her biography is available in 52 different languages on Wikipedia making her the 6th most popular singer.

Page views of Dalidas by language

Among singers, Dalida ranks 6 out of 3,001. Before her are Elvis Presley, Édith Piaf, Janis Joplin, Maria Callas, and Luciano Pavarotti. After her are Frank Sinatra, Charles Aznavour, David Bowie, Julio Iglesias, Tina Turner, and Anni-Frid Lyngstad.

Among SINGERS In Egypt