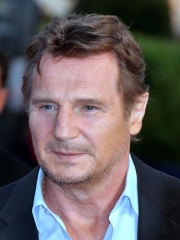 William John Neeson (born 7 June 1952) is an actor from Northern Ireland. He has received several accolades throughout his career, including nominations for an Academy Award, a British Academy Film Award, two Tony Awards, and three Golden Globe Awards. In 2020, he was placed 7th on The Irish Times list of Ireland's 50 Greatest Film Actors.In 1976, Neeson joined the Lyric Players' Theatre in Belfast for two years. Read more on Wikipedia

Liam Neeson is most famous for his role as Oskar Schindler in the film Schindler's List.

Among actors, Liam Neeson ranks 73 out of 10,030. Before him are Nicolas Cage, Jon Voight, Will Smith, Brad Pitt, Gina Lollobrigida, and Catherine Deneuve. After him are Vin Diesel, Clark Gable, Gérard Depardieu, Toshiro Mifune, Paul Newman, and Tom Hanks.